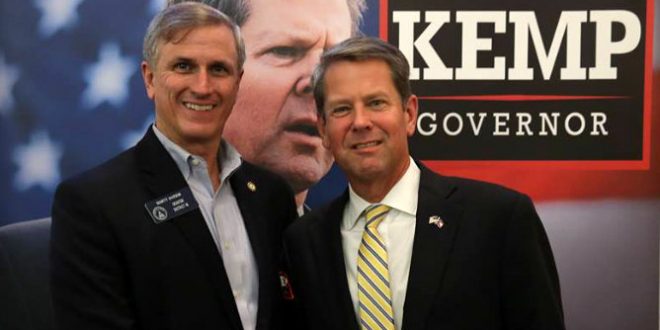 Georgia Republicans are taking another shot at an anti-LGBT “religious liberty” bill similar to the one vetoed in 2016 by then-Gov. Nathan Deal after major corporations threatened to boycott the state.

“Georgians need to be fully protected under the First Amendment,” said state Sen. Marty Harbin [left in photo above], a Republican from Tyrone who introduced Senate Bill 221 on Wednesday. “I don’t see it as a discriminatory issue at all. You could be from that community and have your religious rights violated, and it would protect you.”

“This is not about discrimination against anybody. It’s a protection,” said Mike Griffin, a lobbyist for the Georgia Baptist Convention. “There are situations where we believe Christians are being targeted in some way. And it’s not just about Christians. It’s about all people of faith.”

In 2016, Harbin led a failed effort to override Deal’s veto.