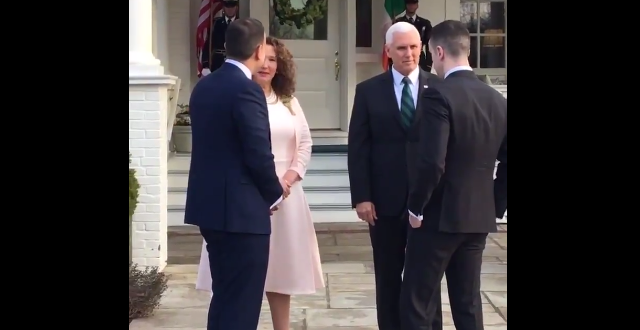 On Thursday, Mr Varadkar attended a breakfast at the residence of vice-president Mike Pence. In a short speech delivered beside the vice-president, the Taoiseach reflected on his ambition to become a politician when he was younger.

“I also knew at the time that I lived in a country where if I tried to be myself at the time it would have broken laws, but today that has all changed. I stand here as the leader of my country, flawed and human, judged by my political actions, and not by my sexual orientation, my skin tone, gender or religious beliefs. We are, after all, all God’s children.”

He invited Mr Pence and his family to visit him at his home in Ireland, with the vice-president confirming that he was in the process of planning a trip to Ireland. Mr Varadkar and his partner Matt Barrett were welcomed by the vice-president and his sister Anne, as his wife Karen was attending the Special Olympics in Abu Dhabi.

The audio is inaudible in the clip below, but the Daily Beast notes that Varadkar stepped to the side “forcing Pence to speak with his partner instead.”

Taoiseach Leo Varadkar and his partner, Matt Barrett, arriving for breakfast here at the US Vice President Mike Pence’s residence in Washington. Quite a significant moment… pic.twitter.com/WRZaUwkAuH