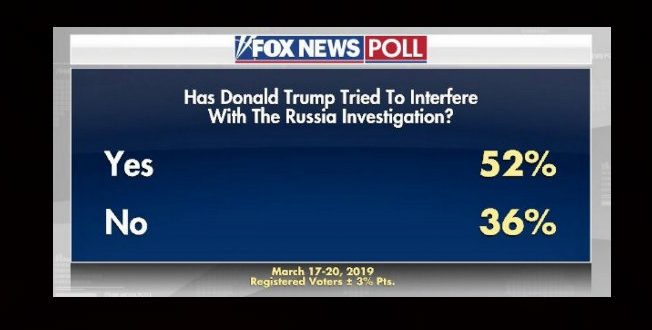 More voters trust Special Counsel Robert Mueller than President Trump when it comes to learning the truth about Russian interference in the 2016 presidential election. At the same time, many say there is no chance Mueller’s investigation will change how they feel about the president, according to the latest Fox News Poll.

The poll, completed before the special counsel delivered his report to Attorney General William Barr, finds that by a 16-point spread, 52-36 percent, voters approve of how Mueller is handling the Russia probe. His best rating of net +22 approval was in August 2018 (59 approve vs. 37 disapprove).

Opinion splits over whether the Trump campaign coordinated with the Russian government during the election (44 percent think it did, 42 percent disagree). However, a majority of voters, 52 percent, thinks President Trump has tried to interfere with the investigation.

Previous Streisand Apologizes For Michael Jackson Comments
Next Jerry Nadler: We’ll Issue Subpoenas To Get Full Mueller Report And Take It To SCOTUS If We Have To [VIDEO]