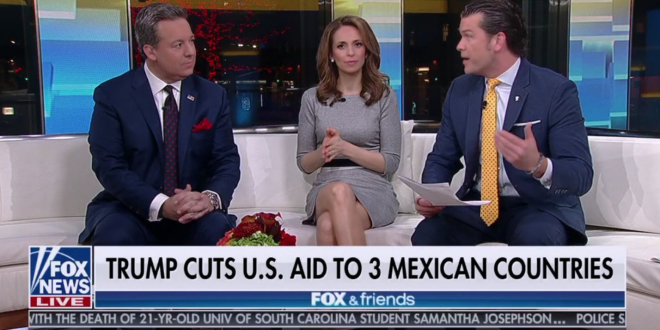 Late yesterday afternoon the Trump administration announced the end of hundreds of millions in annual aid to Guatemala, Honduras, and El Salvador. The move was immediately condemned as deliberately calculated to worsen the migrant crisis in those nations and at the Mexican border.

This morning Trump’s favorite program, Fox & Friends, weighed in with the headline you see above. Many on Twitter naturally suspected that the screengrab now going viral had been photoshopped, but video shows the headline to be real.

This is an actual banner from “Fox & Friends Weekend.” 6:03am today. I double checked because I didn’t believe it at first. Hat tip @BadFoxGraphics pic.twitter.com/tTNH0Y7a25