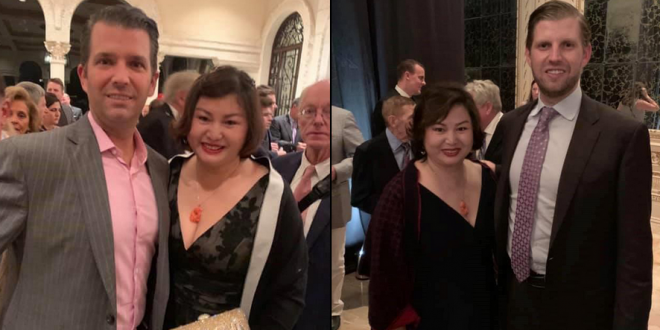 Yesterday the Miami Herald revealed that the chain’s founder, Cindy Yang, who no longer owns the company, took a selfie with Trump at Mar-A-Lago’s Super Bowl party. As it turns out, there is much more to her story.

Beyond this sordid tale, there is another angle to the strange story of Yang: She runs an investment business that has offered to sell Chinese clients access to Trump and his family.  And a website for the business—which includes numerous photos of Yang and her purported clients hobnobbing at Mar-a-Lago, Trump’s private club in Palm Beach—suggests she had some success in doing so.

Yang, who goes by Cindy, and her husband, Zubin Gong, started GY US Investments LLC in 2017. The GY US Investments website lists upcoming events at Mar-a-Lago at which Yang’s clients presumably can mingle with Trump or members of his family. This includes something called the International Leaders Elite Forum, where Trump’s sister, Elizabeth Trump Grau, will supposedly be the featured speaker.

Previous Maher Plays “If Obama Did It” With CPAC Chairman
Next GOP Rep: DOJ Will Block Access To Full Mueller Report