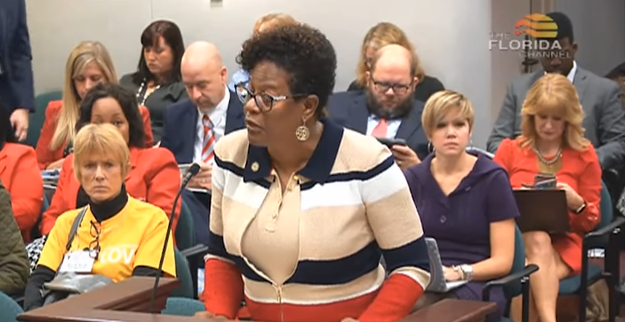 A bill that would require Florida public high schools to offer an elective course on the Old Testament and New Testament began moving through the Florida House on Wednesday, but not without significant concerns raised about its possible unconstitutionality.

Bill sponsor Rep. Kim Daniels [photo], a Jacksonville Democrat who last year passed legislation requiring schools to conspicuously post the phrase “In God We Trust,” did not accept any requests to soften the language.

She deemed “unfriendly” an amendment to indemnify school districts from any lawsuits that result from the requirement, which Rep. Jennifer Webb, D-Gulfport, suggested were likely to occur. She rejected any thought of adding the Koran or other titles to the course requirement.

The bill has passed out of its first committee and now moves to an appropriations committee before reaching the full chamber.

Daniels, you may recall, claims to be an exorcist by trade and that children’s dolls are sometimes possessed by demons. For real.