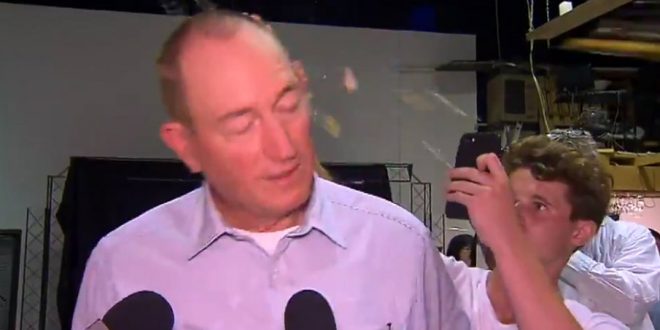 An Australian senator who blamed the New Zealand terror attack on Muslim immigration has punched a 17-year-old boy after he was egged at an event in Melbourne.

Video footage recorded at the event appears to show Fraser Anning, a far-right independent Queensland senator, halfway through a press conference when the teenager cracked an egg over his head while filming with a mobile phone.

The senator responded by punching the 17-year-old. The teenager was then tackled to the ground by Anning’s supporters and held in a chokehold. The boy was later taken away by police and released without charge.

A fundraising page has already been set up to collect donations to cover the teenager’s legal fees and to buy “more eggs”. Victoria Police said the incident is being investigated “in its entirety” including Senator Anning’s actions. About 60 people attended the meeting in an industrial part of the suburb at which Senator Anning spoke.

Far-right agitator Neil Erikson was controlling access to the building. Last year, Mr Erikson was convicted of inciting serious contempt against Muslims, over a mock beheading he staged in the regional Victorian city of Bendigo in 2015.

WATCH: This is the moment Senator Fraser Anning was egged by a teenage boy during a press conference in Melbourne. #9News pic.twitter.com/oePwz3pPH2

This is what Fraser Anning’s right-wing lads did to the boy. #auspol #FraserAnning pic.twitter.com/sJNzRLppG5

Someone has just slapped an egg on the back of Australian Senator Fraser Anning’s head, who immediately turned around and punched him in the face. @politicsabc @abcnews pic.twitter.com/HkDZe2rn0X