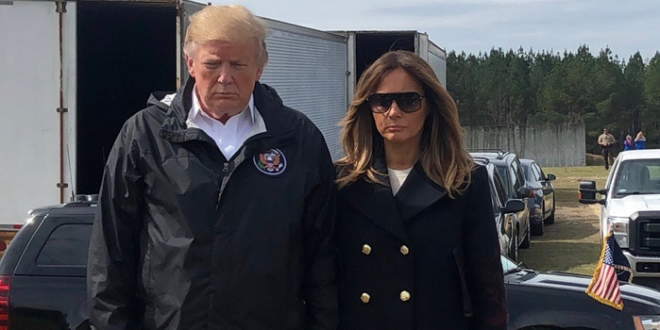 The “Fake Melania” chorus of social media voices has struck again. In what seems to be the biggest irony ever, Trump who had been at the forefront of the “birther” movement against President Barack Obama, having accused the latter of not being born in the United States, now faces a “truther” movement of his own.

“Fake Melania is back on the job,” one user tweeted yesterday–to almost 10,000 likes. The president and his wife had been paying a visit to Alabama to remember victims of the Alabama tornado. “Holy bad body doubles, Batman!” tweeted another user to almost 1,500 likes.

This is now the third time since 2017 that #FakeMelania has dominated Twitter. At this writing the hashtag is trending at #2 nationwide and has been since last night.

Melania couldn’t even be bothered to travel to Alabama for trump’s Bible signing! I know a reconstructed sad mug when I see one, and that ain’t it.

Fake Melania is back on the job. https://t.co/YHwKVXvBYM

I know everyone likes to laugh about how stupid the #FakeMelania conspiracy is.
So let’s just look at these two pictures from yesterday. How does a human being shrink a good five inches in a matter of hours? pic.twitter.com/G2wx9MiCfj

My only surprise is that #FakeMelania doesn’t trend every time she says something.

And another shot of the agent. She’s wearing heels too but is shorter than Melania, as others have pointed out in #FakeMelania pix with Trump pic.twitter.com/BCzw7ZAGLx