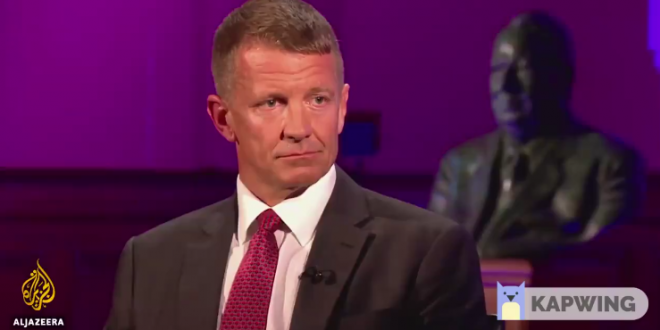 Erik Prince: I Was At 2016 Trump Tower Meeting

Erik Prince, former head of mercenary business Blackwater, revealed in a bombshell interview Friday that he attended a meeting in Trump Tower with Donald Trump Jr. and a representative of Saudi Arabia and the United Arab Emirates to discuss “Iran policy” during the presidential campaign. The interview marked the first time Prince has publicly acknowledged such a meeting. Prince said in congressional testimony in 2017 that he had no “official” or “unofficial” role in the campaign — other than a “yard sign” and writing “papers” — according to the transcript of his testimony before the House Intelligence Committee.

That meeting was attended by Prince, Donald Trump Jr, George Nader, a former Blackwater employee and emissary for the crown princes of Saudi Arabia and the United Arab Emirates, Stephen Miller, then a top aide to the Trump campaign and currently a senior policy adviser to the president and Joel Zamel, whose company Psy-Group employed former Israeli intelligence operatives and specialised in social media manipulation and was reportedly contacted by Rick Gates, a top Trump campaign official, for proposals for social media manipulation to help Trump win the election.

It’s a detail that Prince failed to mention when he spoke to the House Intelligence Committee last year, and one that he fumbles over repeatedly, when Hasan asks him why he did not bring it up during his testimony. “I don’t know if they got the transcript wrong” is, to say the least, an unconvincing answer. Later in the interview, he tries a similar angle, claiming that “not all of the discussion that day was transcribed.” Prince’s comments are the first public acknowledgement of the meeting from any of its reported attendees, and the first time it’s been publicly stated that the meeting was about Iran policy.

Erik Prince responds that the U.S. Congress “got the transcript wrong” when asked why he didn’t tell the House Intel Committee about an Aug 2016 meeting he attended at Trump Tower. @Mehdirhasan goes ‘head to head’ with Erik Prince NOW @AJEnglish. pic.twitter.com/VCB7HKdyjT

Here’s my full Erik Prince interview at the Oxford Union folks, which I see is trending on Twitter tonight 🙂