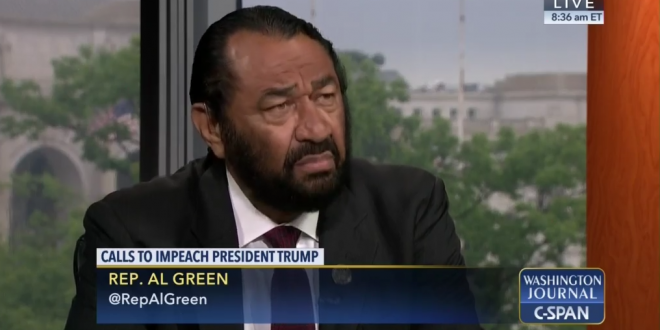 In a news conference held in his office, Green (D-Texas) rebuked those who would put “political expediency ahead of moral imperative,” but did not disparage Pelosi, who on Monday made waves by saying that the president wasn’t worth the trouble of impeachment.

Benjamin Parker writes for The Bulwark:

Pelosi wants to be able to run against Trump. He has historically low approval ratings and historically high disapproval ratings. At no point in his presidency has he had net favorability, including immediately after his inauguration, when most presidents enjoy a grace period.

At his best mark ever, he was net unfavorable by 2 percent; at his worst, 25 percent. Running against Trump was a winning strategy in the 2018 midterms, which saw Democrats gain 40 House seats and a 7 percent popular vote margin with record turnout.

Pelosi would be foolish to change that formula. Trump supporters, instead of gloating, should consider why Pelosi’s stance is not crazy.

Previous Dems Target Trump Cultists With Journalist Protection Act Making It A Federal Crime To Assault Reporters
Next Catholic League: The LGBT Equality Act Will Lead To Affirmative Action For Gays And The Sexually Confused