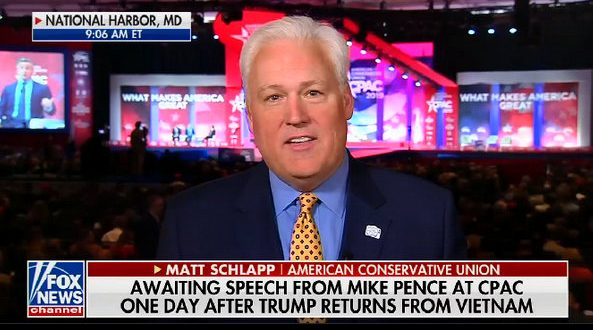 “It’s the radicalism of what is happening to the Democratic Party. Look, the conservative movement in the Republican Party believes that each American has the right to make their own decisions on how to live their life and the fact is if Mike and Karen Pence are people of faith and want to live out their faith in their own individual lives and with their family, guess what? That’s also protected by the First Amendment.

“It is the growing intolerance on the left towards Americans who want to make their own religious choices, including their own sexual choices, that should be respected. I’m sad the left won’t respect their choices.” – CPAC head Matt Schlapp, when asked about the below Twitter exchange. Schlapp’s wife Mercedes Schlapp works in the White House.

You’re right, Cynthia. I was making a point in a foreign policy context, that under normal circumstances a Vice President wouldn’t be given a silent reaction on the world stage.

But there is nothing decent about being anti-LGBTQ rights, and that includes the Vice President.

Previous Conway: Trump Has “Absolute Right” To Order Security Clearances Over Objections Of Intelligence Officials
Next Bernie On Taking Advice From Hillary: “I Think Not”