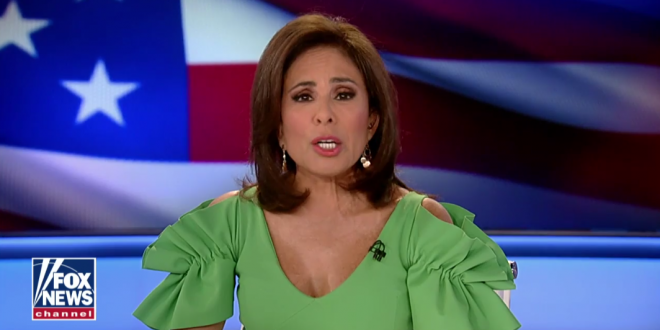 Jeanine Pirro, whose show did not air on Saturday night, was suspended by Fox News after her widely criticized commentary doubting Congresswoman Ilhan Omar’s patriotism, according a source familiar with the matter.

Fox did not announce the suspension publicly. The network declined to confirm or deny that Pirro has been suspended. There is no word on whether Pirro’s show will return next week.

At the same time, there is no indication that she has been fired from Fox. The source said she has not been fired. Pirro is one of the network’s highest-rated weekend hosts, well known for her vehement defenses of President Donald Trump and attacks against his perceived enemies.

Jeanine Pirro was *suspended* by Fox News after her widely criticized commentary about @IlhanMN, according a source familiar with the matter. It’s unclear how long the suspension will last. Fox declined to confirm or deny this. https://t.co/pp2Rn3QYb5

#JudgeJeannie #BoycottFoxNews
☆ Fellow Patriots
Boycott Fox News ! Until The Return of Judge Jeannie Pirro Returned To The Air. She Is Being Denied The Freedom Of Speech!
☆ Retweet ☆ https://t.co/ShHM1T5Io6

@FoxNews Judge PIRRO was only speaking the TRUTH WHEN SHE SAID SHARIA LAW IS INCOMPATIBLE WITH THE UNITED STATES CONSTITUTION. IS DISNEY CALLING THE CARDS ON THIS FIASCO. BOYCOTT FOX NEWS UNTIL JUDGE PIRRO IS BACK ON THE AIR. SUPPORTING A RADICAL MUSLIM OVER A PATRIOT, SHAMEFUL!

Previous Australian PM Calls For Assault Charges For Far-Right Senator Who Punched Teenage Boy Who Egged Him
Next Two Corinthians Walk Into A Church On St. Patrick’s Day