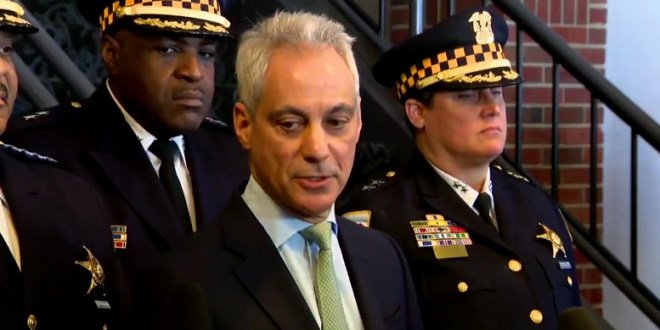 Emanuel lambasted Smollett as selfishly exploiting hate crime laws for his own personal gain. “He took those laws and turned them inside out and upside down,” Emanuel said, repeatedly reminding reporters that a grand jury heard the case and brought the charges against Smollett.

BREAKING: Chicago Mayor Rahm Emanuel on dropping of Jussie Smollett charges: “This is a whitewash of justice.” https://t.co/B2ahaJSxt3 pic.twitter.com/UI65nAD8Rp

Chicago Mayor Rahm Emanuel says Jussie Smollett was “let off scot free, with no sense of accountability for the moral and ethical wrong of his actions” https://t.co/kNQqMavks3 pic.twitter.com/tPLBJZe7Sl

Chicago Mayor Rahm Emanuel: “[Jussie Smollett] did this all in the name of self-promotion. He used the laws of the hate crime legislation that all of us have put on the books — to stand up for the values that embody what we believe in. This is a whitewash of justice.” pic.twitter.com/GEfyQQNU8w