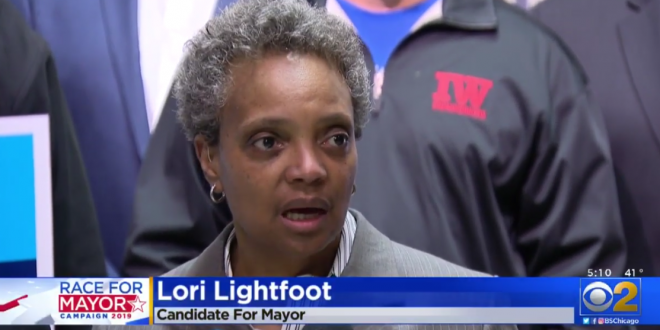 CHICAGO: Flyers Claim Lesbian Mayoral Candidate Will Give “All Contracts And Jobs To Gay People” [VIDEO]

Lori Lightfoot jokingly refers to herself as a “triple-threat” because she is an African-American woman vying to become Chicago’s first openly-gay mayor. Now, her sexuality is the subject of a dishonest and deceptive flyer distributed to parishioners at black churches on the South Side and elsewhere.

On one side of the flyer is a picture of Lightfoot and her wife, Amy Eshelman, with a sign beneath the couple that reads, “The Gay Equality Act !!! It’s our turn.” Beneath that is a line in red print: “1st openly gay woman in City Hall.” Above the couple is another line in red that says, “The Feminist and Gay Movement Have Come Full Circle.”

The flip side of the flyer says, among other things, “ALL CONTRACTS, JOBS AND EMPLOYMENT NEWLY ASSIGNED EXCLUSIVELY TO GAY PEOPLE!”

The flyers suggest if Lightfoot is elected mayor that all contracts, jobs, and employment opportunities will be given exclusively to gay people and that churches will have to abide by the gay marriage laws.

“Any attempt by anyone to propagate hate, we have to stand together as a city to demand and denounce it unequivocally, because hate can have no place in our city,” Lightfoot said.

The flyers also come one week after Toni Preckwinkle was accused of using Lightfoot’s sexuality as a dog whistle during a debate – something Preckwinkle denied. On Monday, she denounced the flyers. “I condemn them, they have nothing to do with our campaign. It’s disgraceful,” Preckwinkle said. 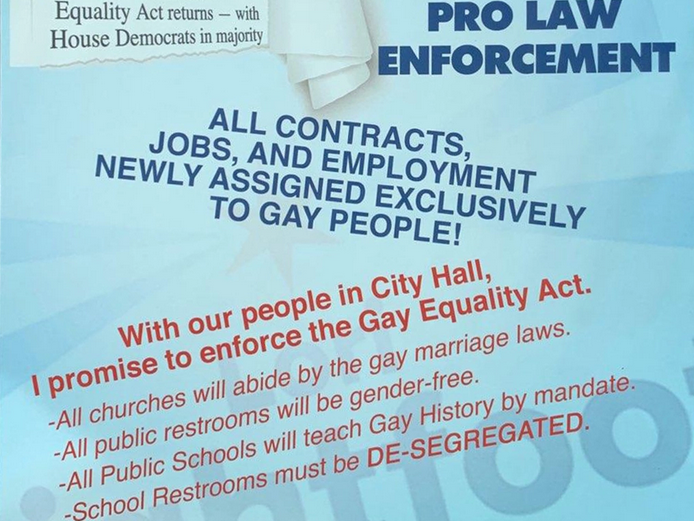