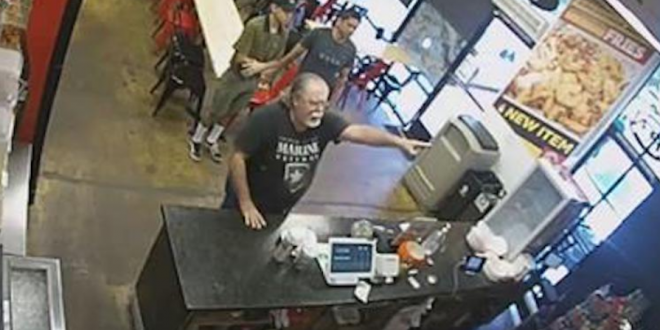 A customer — confused about a special at a taco restaurant — went on a racially-charged tirade after learning he couldn’t get his $2 taco on Monday. The man scared employees and yelled several threats to them before taking off.

Several signs greet visitors to Palapas Tacos on Lincoln Avenue in Anaheim, advertising daily specials in both English and Spanish. But Monday, a customer misunderstood a banner advertising “Fish Tacos for $1.99 All Day,” but he didn’t understand the header: “Especial de Viernes,” indicating the restaurant’s Friday special.

Security cameras caught the tirade on tape. “That’s bullshit!” yelled the unidentified man. “It says it in Mexican. We’re not in Mexico. We’re in America! Above the border. The red, the line. I’m an American!”

The customer then threatened to call “immigration” after the manager tried to calm him down.