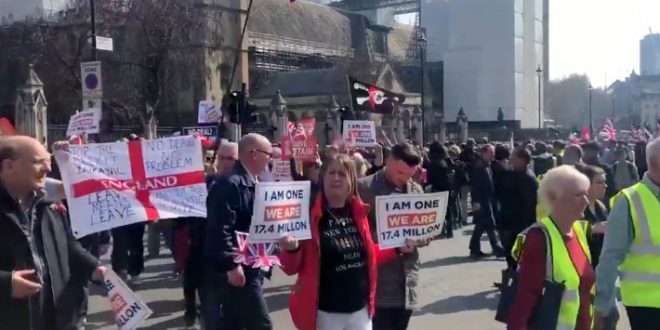 Thousands of people opposed to Britain delaying its departure from the European Union marched through central London on Friday as lawmakers in parliament strongly rejected Prime Minister Theresa May’s Brexit deal for a third time.

On the day that Britain was originally meant to be leaving the EU, large groups gathered outside parliament waving Union Jack flags and chanting, “Out means out” – as the Queen song Bohemian Rhapsody was played on a loudspeaker with its famous lyric “Mama Mia, let me go”.

The Leave for Britain march arrives in Parly Square pic.twitter.com/Ssg6VDB7tt

The Remoaners want this picture taken down because it shows the whole of London turning up to welcome the Arrival of the March To Leave, so please don’t retweet it #MarchToLeave pic.twitter.com/hQv3Rd8NQY