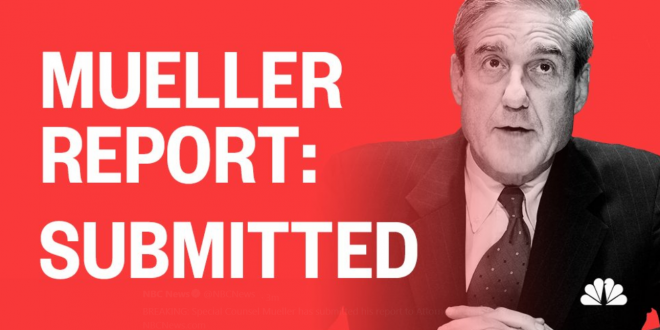 The special counsel, Robert S. Mueller III, has delivered a report on his inquiry into Russian interference in the 2016 election to Attorney General William P. Barr, according to the Justice Department, bringing to an apparent close an investigation that has consumed the nation and cast a shadow over President Trump for nearly two years.

Mr. Barr will decide how much of the report to share with Congress and, by extension, the American public. The House voted unanimously in March on a nonbinding resolution to make public the report’s findings, an indication of the deep support within both parties to air whatever evidence prosecutors uncovered.

The next steps are up to Attorney General Barr, and we look forward to the process taking its course. The White House has not received or been briefed on the Special Counsel’s report.

A.G. Barr has confirmed the completion of the Special Counsel investigation. We look forward to getting the full Mueller report and related materials. Transparency and the public interest demand nothing less. The need for public faith in the rule of law must be the priority. pic.twitter.com/QYA2xCR1QW