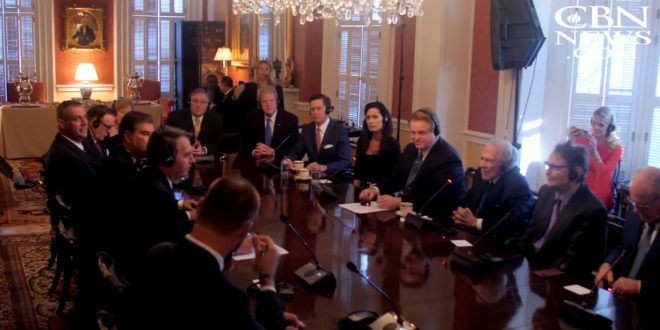 Jair Bolsonaro, Brazil’s right-wing president, visited President Trump in the White House on Tuesday and followed up his official business with a Christian Broadcasting Network interview and meeting with conservative religious leaders, including CBN’s Pat and Gordon Robertson.

CBN noted that Bolsonaro “has surrounded himself with well-known Brazilian evangelicals,” including influential pastor Silas Milafaia, who told CBN he believes Bolsonaro is God’s chosen man to lead Brazil. He praised Bolsonaro for opposing abortion and the “privilege” of the LGBT movement.

CBN’s Thomas asked Bolsonaro about the impact that “decades of leftist ideology has had on the social and spiritual fabric of Brazil.” Bolsonaro responded that the ideology of the left has taken over universities and journalism and eroded family values.

The clip below is from Pat Robertson’s network. Watch them all screw up their faces and hold hands as they pray.

Previous REVEALED: Nation’s Largest Christian Charity Has Given Tens Of Millions To Viciously Anti-LGBT Hate Groups
Next Kellyanne Conway Defends Trump Over Her Husband: “You Think Trump Should Take All That Sitting Down?”