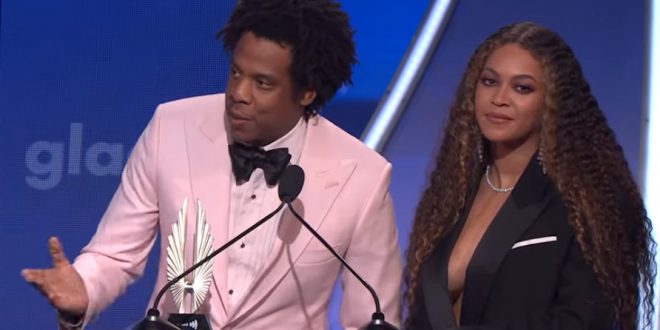 Beyonce got emotional Thursday night as she and husband Jay Z were honored for being allies to the LGBTQ community. “We’re here to promote love for every human being,” said Beyonce, taking the stage at the GLAAD Media Awards at the Beverly Hilton Hotel with Jay Z.

Presented with GLAAD’s Vanguard Award, Beyonce paid tribute to her late Uncle Johnny, “the most fabulous gay man I have ever known,” she said.

“He lived his truth; he was brave and unapologetic during a time when this country wasn’t as accepting — witnessing his battle with HIV was one of the most painful experiences I’ve ever lived,” she shared.

During Jay-Z’s speech he praised his mother, who came out as a lesbian on the groundbreaking track “Smile” from his album 4:44.

“I get to follow in her footsteps for spreading love and acceptance and her beautiful speech at the end of the song — and for allowing me to tell her story,” he said. Jay-Z received a GLAAD Special Recognition Award last year for the song and the music video.

Beyonce then turned to Jay-Z and praised him for making incredible strides in advocating the LGBTQ in the hip-hop community, which has a history of being homophobic. “It is a privilege to watch you take those steps and to stand right next to you,” she said.

“Who you make love to, and take that ass to Red Lobster, is your human right.” —Beyoncé #GLAADawards 👑🏳️‍🌈 pic.twitter.com/SgSGiYyHsU