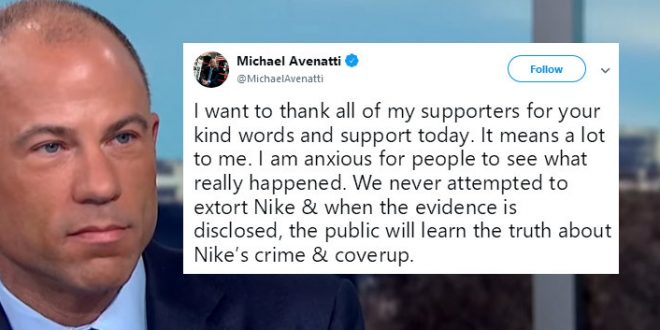 Avenatti Out On Bail, Vows To Expose Nike [VIDEO]

Celebrity attorney Michael Avenatti denied on Tuesday that he had tried to shake down Nike, and he accused the sports apparel giant of committing a “crime and coverup.”

Avenatti tweeted his denial a day after he was arrested on federal charges, including trying to extort up to $25 million from the sports apparel company by threatening to reveal evidence he claimed he had of misconduct by company employees in the recruitment of college basketball players.

Avenatti was released from Manhattan federal court after signing a $300,000 personal recognizance bond on Monday. In a news conference after his release, Avenatti said he was “highly confident” that when all the evidence was revealed, he would be “fully exonerated, and justice will be done.”

I want to thank all of my supporters for your kind words and support today. It means a lot to me. I am anxious for people to see what really happened. We never attempted to extort Nike & when the evidence is disclosed, the public will learn the truth about Nike’s crime & coverup.

Previous Junior Demands FBI Probe Into Top Democrats Because “It Was Them Colluding” With Russia, Not Us [VIDEO]
Next TODAY: Supreme Court Hears Gerrymandering Cases