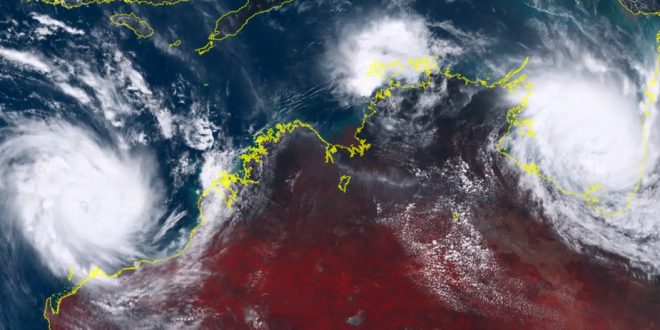 Thousands of Australians have been forced to evacuate their homes in preparation for two potentially devastating cyclones. Over the weekend, Cyclone Trevor will hit the north while Cyclone Veronica will strike the country’s west coast.

Destructive winds are expected, while heavy rains and large waves threaten to cause severe flooding. Experts say a “severe impact” is likely and residents have been told to prepare for a “massive weather event”.

It is only the second time in history that two cyclones are predicted to strike the country at the same time. The storms could bring a year’s worth of rain in just a couple of days.

While called tropical cyclones over Australia’s waters, Trevor and Veronica are no different from the hurricanes that form in the Atlantic and the Gulf of Mexico, except they spin clockwise instead of counterclockwise.

They are fueled by warm ocean waters and have the potential to unleash flooding rainfall, damaging winds and a devastating storm surge, which is a rise in ocean water above normally dry land.

It is the end of summer and start of fall in the Southern Hemisphere and, just as in the Northern Hemisphere, this is near the peak time for storms of tropical pedigree.

Not one but TWO tropical cyclones will affect northern Australia over the coming days; #Veronica and #Trevor. It could be only the second time in Australia’s history that two Category 4 or above cyclones cross the coast within 24 hours of each other pic.twitter.com/htPb10MFPJ

Two ferocious cyclones are taking aim at Australia this weekend, with the possibility that both could make landfall as Category 4 or greater storms within 24 hours of each otherhttps://t.co/hdA4KjHzpz

Previous Giuliani: Waiting For The Mueller Report Is Like Waiting For A Baby, I’ll Give Out Cigars If The Verdict Is Good
Next NYC LGBT Center Cancels Homocon #WalkAway Event