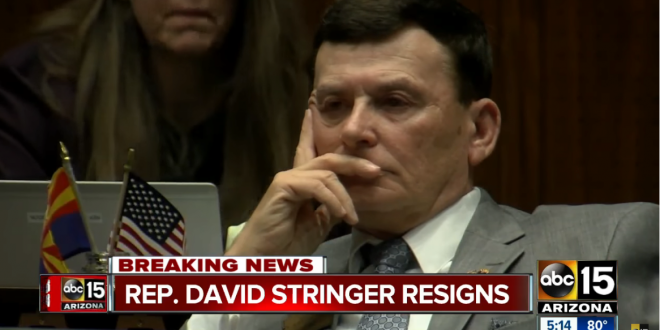 Documents gathered as part of the House Ethics Committee’s investigation into the conduct of former Prescott Rep. David Stringer show the lawmaker allegedly paid children for sex acts in the 1980s. Stringer resigned earlier this week rather than comply with the committee’s subpoena as it looked into a 1983 sex abuse case and racially insensitive statements he made in 2018.

The release of the documents follows through on a statement by House Speaker Rusty Bowers when he accepted Stringer’s resignation, saying the committee would release the documents it had gathered “as soon as possible” but not a formal report.

Included in the documents is the original Baltimore Police Department report of its sex abuse investigation. Detectives say Stringer paid two teens, both younger than 15 years old, to perform sex acts. One of the victims was also living with a mental disability, police said, and Stringer “knew or should have known” of the victim’s condition.

The police report states police arrested Stringer in September 1983, after a boy told officers that Stringer had met him and a friend in a park a year earlier, and asked them to come back to his apartment to have sex.

One of the boys told police he had been back to see Stringer at least 10 times to perform oral sex or penetrative sex, the report states. The boy told police his last visit with Stringer was in July 1983, when they had sex and took a shower together.

Stringer later accepted a plea deal on some charges. But few details of Stringer’s sentence are known because a judge expunged the case in 1990, erasing the court records.

In audio obtained by Phoenix New Times, Stringer can be heard saying African-Americans “don’t blend in,” calling non-native English speaking students a “burden,” and remarking that Somali-Americans, comparing them with Polish-Americans, don’t look like “every other kid.” Stringer made national headlines in June after he was heard in a viral video saying “there aren’t enough white kids to go around” in Arizona public schools.

First tweets below are from the governor.

These latest reports about David Stringer are disgusting and deeply disturbing. I called on him to resign last year, and it couldn’t have happened soon enough. However, these revelations are far worse than anything we were aware of before. (1/2)

Someone capable of these acts has no place at this Capitol. (2/2)

BREAKING: Former Arizona Rep. #DavidStringer was arrested in 1983 for allegedly paying two boys under the age of 15 to have sex with him. One of the boys had a developmental disability: https://t.co/YJTlPpOKqg …#AZLeg @azcentral @azcpolitics @AZHouseGOP @AZHouseDems

Without a majority now, House Republicans are cancelling floor debate and votes until disgraced ex-Rep. David Stringer is replaced, via @jeremyduda https://t.co/lVrkVHpBx0