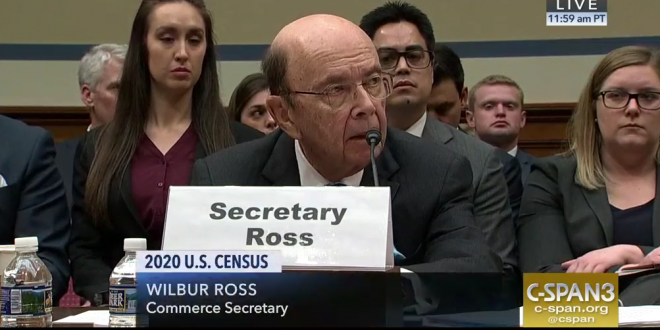 Commerce Secretary Wilbur Ross defended his decision to add a citizenship question to the 2o20 census, telling lawmakers on Thursday that he acted solely at the request of the Justice Department to enhance the Voting Rights Act, denying it was intended to influence the allocation of congressional seats across the country.

His testimony before the House Oversight Committee comes after 2 federal judges blocked his move to add the question, ruling it lacks a factual basis for necessity and would unconstitutionally suppress responses from non-citizens.

The Supreme Court is set to hold a hearing next month — with a ruling expected by June — on the consequential blockbuster case that would inform and shape public policy for the next decade.

so i just figured out (i think) why AOC is good in these hearings. she’s doing a columbo thing. “i just have one more question, just a clarification…” and thats when she lowers the boom. pic.twitter.com/O8ixRVzoGK

.@aoc v. Wilbur Ross. It does not go well (for him). pic.twitter.com/HijDk9toVX

The one where @AOC plays @MarkMeadows for the fool he is. Oh and Wilbur Ross too. 🔥

Wilbur Ross tried to run out the clock on @AOC. It didn’t go so well for him or Republicans who professed confusion on her question.https://t.co/Prq1Q7XxNp

We made serious cracks in the citizenship question case, which seriously threatens the Census.

You know the questioning is good when the GOP tries to challenge you into stopping, are unsuccessful, and an army of lawyers starts freaking out.

Previous Giuliani Colleague: My Email Wasn’t Offering Cohen A Pardon, It Was A Reference To A Garth Brooks Song
Next Sen. Kamala Harris Blasts Pence On LGBT Rights And That He Won’t Meet With Women By Himself [VIDEO]