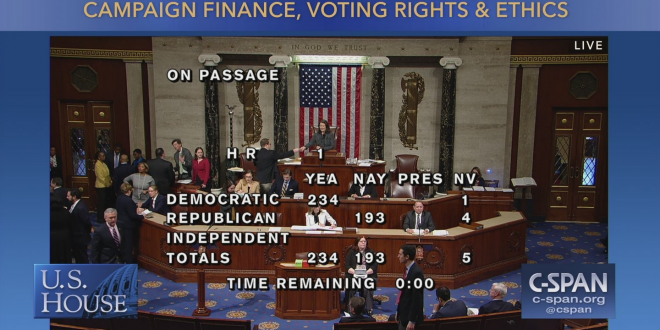 The House on Friday approved a far-reaching elections and ethics bill — one that would change the way congressional elections are funded, impose new voter-access mandates on states, require “dark money” groups to publicize their donors and force disclosure of presidential candidates’ tax returns.

Democrats dubbed the bill H.R. 1, a designation meant to signal its place as a centerpiece of their congressional agenda. The measure, which has more than 500 pages, contains dozens of provisions favored by liberal advocacy groups, labor unions and other Democratic allies.

The bill is headed for a brick wall in the Republican-controlled Senate, where Majority Leader Mitch McConnell (R-Ky.) has dismissed it as the “Democrat Politician Protection Act” and made clear it will not get a vote.

With #HR1, we’re closer than EVER to the reforms we need to tackle Trump and his cronies’ corruption—and strengthen our democracy #ForThePeople. pic.twitter.com/9k7buiD0Mc

As GOP stands unified against a bill to strengthen our democracy & increase transparency in our elections, it’s important to remember that the #NC09 seat is vacant because a GOP candidate tried to steal an election & only failed because local journalists uncovered the truth. #HR1

Could it be that he thinks Republicans will have a hard time voting against pro-democracy reforms? https://t.co/i4mqH3pxHv