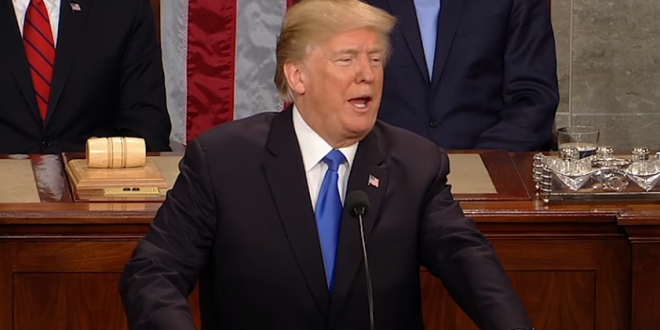 President Donald Trump heads into his State of the Union address dogged by bruising midterm losses and sinking poll numbers, wounded by a blistering standoff with Democrats. But for the stately speech, he plans to embrace unity — at least for the night. “Choosing Greatness” is the official White House theme.

Addressing the nation at the weakest point of his presidency, Trump will seek to use the ceremonial moment to pitch a unifying vision and reset relations with Democrats. The prime-time presidential set-piece Tuesday night comes amid a bitter border wall fight that nearly derailed the speech altogether, but Trump is not expected to dwell on the rancor.

Trump, who loves to build suspense, has teased that he could drop a big announcement in his speech, suggesting Friday he might make news on his threat to declare a national emergency to circumvent Congress in his quest to build his long-promised border wall.

The White House provided the first early excerpt from the speech to reporters, though an official noted the president and his team continue to make tweaks leading up to the day the speech is delivered.

“Together we can break decades of political stalemate, we can bridge old divisions, heal old wounds, build new coalitions, forge new solutions and unlock the extraordinary promise of America’s future,” the president will say, according to the excerpt. “The decision is ours to make.”

He’s likely to face an icy reception from many members in the chamber, after saying on Twitter Thursday that the Democrats “are becoming the Party of late-term abortion, high taxes, Open Borders and Crime!”