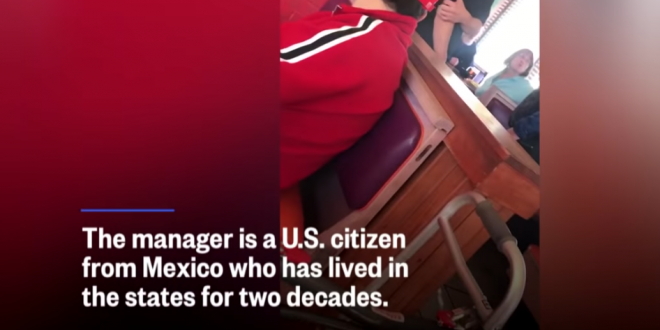 VIRAL VIDEO: Woman Melts Down In Mexican Eatery At Hearing Spanish, “Get The Fuck Out Of My Country”

A video showing a white woman swearing at the general manager of a Mexican restaurant in West Virginia for speaking Spanish went viral over the weekend. “English is our first language, so you need to speak English,” the woman, identified in the video as Jill, screamed at Sergio Budar, the manager. “Get the f— out of my country.”

One of two videos capturing the incident shows how customers at Tampico Mexican Restaurant in Parkersburg, West Virginia, were astonished at the woman’s remarks.

“It makes me feel angry, sad. It’s unbelievable that we’re still seeing this kind of behavior to this day,” Budar, who’s originally from Mexico, told NBC News. “I’ve been living here for almost two decades, and counting. I got my U.S. citizenship while here, but that doesn’t mean that people can’t speak other languages that are not English.”

Previous DNC To Ask All 2020 Candidates To Sign “Affirmation” That They Will Campaign And Serve As Democrats
Next Christian TV Host: Trump Only Wants To Decriminalize Homosexuality Because He Is “Owned By The Jews”