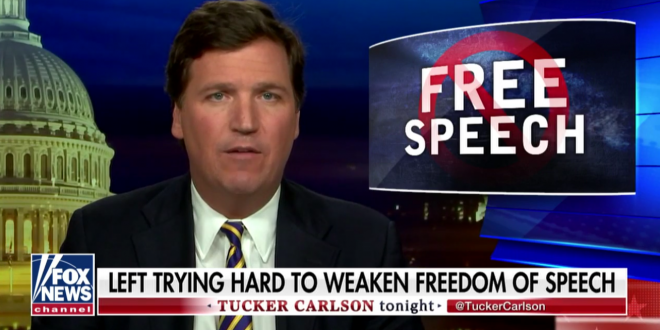 “Like most on the left, what [PayPal CEO Daniel] Shulman actually wants is utter conformity, a world where only approved opinions are allowed. Last year PayPal banned Alex Jones from using its platform for saying things they didn’t like. They’ve also banned anti-Muslim activist Laura Loomer, the publication VDare and a number of other people and organizations whose speech they believe should be silenced. Shulman admitted that his company takes guidance on who to ban from Southern Poverty Law Center. That’s an entirely fraudulent organization that works as an arm of the Democratic National Committee.” – Tucker Carlson, on last night’s show.

VDare is named for Virginia Dare, who is believed to have been the first white child born in what would become the United States. See the SPLC’s report on their history. At the 2016 Republican convention, two tweets from VDare appeared on the Jumbotron, something they continue to celebrate in their Twitter profile.

Thanks To Tucker Carlson! Tucker Calls Out PayPal For Deplatforming, Names https://t.co/5EONqg86yi Among Victims https://t.co/M36eJZ63nM pic.twitter.com/Q0nuFDLi6O

Previous Cohen To Testify Trump Used Fake Buyer For Portrait Of Himself, Paid With $60,000 In Charity Foundation Funds
Next CHICAGO: Open Lesbian Advances To Mayoral Runoff