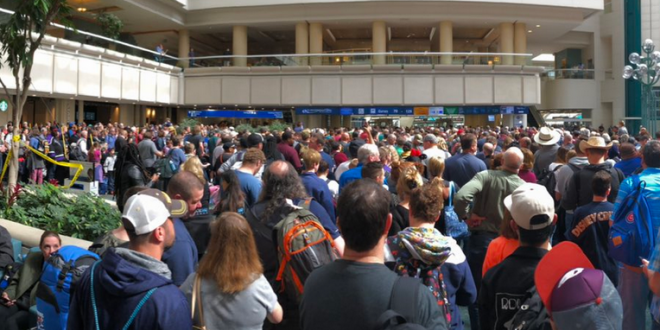 A Transportation Security Administration agent was killed Saturday morning after jumping from a hotel balcony into the atrium of Orlando International Airport, authorities said.

The incident caused the Federal Aviation Administration to briefly ground all flights, causing delays and massive lines at security checkpoints, which were closed because of the suicide.

Sgt. Eduardo Bernal, a spokesman for the Orlando Police Department, said the agent jumped from an upper floor of the Hyatt Regency Hotel into the atrium area of the airport, where some security checkpoints begin.

Paramedics transported the man, who was in his 40s, to a local hospital, where he was pronounced dead. Jim Gregory, a spokesman for TSA, said the agent had just finished his shift when he jumped.

Airport officials said people waiting to go through security for gates 70 through 129 rushed past screening following the incident. As a result, those terminals closed while officials made sure everyone went through security.

This is an isolated incident within the atrium area of the airport. Any reports of suspicious vehicles related to this incident are FALSE. The person that jumped has been pronounced deceased…

We are working closely with our partners at @TSA and @MCO to restore normal airport operations. We ask that you have patience with airport personnel as they work through this tragic incident…

Absolute mayhem at the Orlando Airport #MCO. A TSA agent jumped from a top balcony, unidentified bangs go off, people running everywhere, and right past the security, which then led to a security breach. Security shutdown for 3 hours, all passengers must exit & re-enter. pic.twitter.com/O9VDWukrZJ

Decidedly not a good day to travel at #MCO @mco because of an apparent suicide, security lines have been shut down and flights recalled. This is the current status: pic.twitter.com/UDWa1EtefP

Some passengers told me off camera they’re trying to rebook their flights. Many of them aren’t allowed in security area. @WFTV pic.twitter.com/0wcOtkn2IA