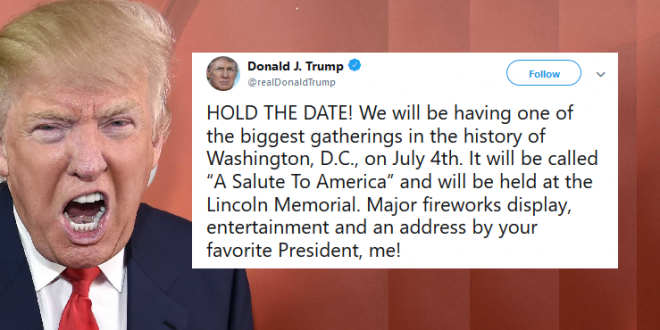 Trump Wants To Turn Fourth Of July Into Trump Rally

President Donald Trump announced Sunday morning that he would highlight his own July Fourth celebration at the Lincoln Memorial this summer, possibly setting up dueling celebrations of Independence Day at opposite ends of the National Mall, one anchored by Congress and the Capitol, and another one by the President.

The President said the event would be called, “A Salute to America” – it will evidently compete with the annual “A Capitol Fourth” held on the West Front of the Capitol, and broadcast live around the nation by PBS. There was no immediate comment from PBS, which has run “A Capitol Fourth” for forty years.

It’s also unclear exactly how the “Salute to America” event would work alongside — or in place of — Washington’s annually televised Fourth of July concert and fireworks near the Capitol building. Inspired after attending a Bastille Day parade in France, Trump said last year that a military parade in Washington would be “great for the spirit of the country,” but that it would need to come at a “reasonable cost.”

HOLD THE DATE! We will be having one of the biggest gatherings in the history of Washington, D.C., on July 4th. It will be called “A Salute To America” and will be held at the Lincoln Memorial. Major fireworks display, entertainment and an address by your favorite President, me!