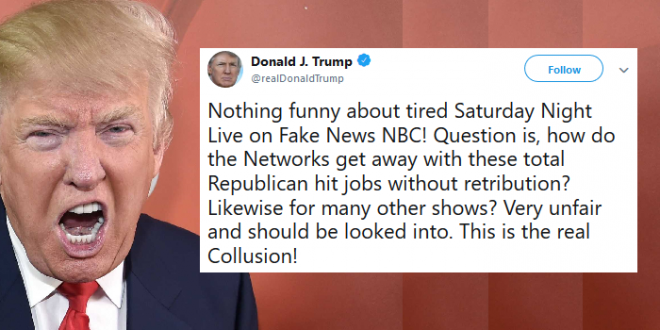 President Trump on Sunday accused major news networks of engaging in “collusion” against his administration, asking how NBC’s “Saturday Night Live” could get away with “hit jobs” without retribution.

The tweet from Trump came just a day after “Saturday Night Live” took aim at his move to declare a national emergency to fund the construction of his long-promised border wall.

Actor Alec Baldwin, who has repeatedly impersonated Trump throughout his presidency, called the emergency “fake” and called out many of the justifications Trump used to support it.

“I’m here to declare a very urgent, important national emergency,” he said. “This is a big one so I don’t want to waste any time. I just had a great health exam. I’m still standing 6 foot 7, 185 pounds. Shredded.”

“We need wall, okay,” he added, sounding a little bit like Tonto, Tarzan and Frankenstein. “Wall works. Wall makes safe. Abuelas and bebes unless you give me wall.”

Nothing funny about tired Saturday Night Live on Fake News NBC! Question is, how do the Networks get away with these total Republican hit jobs without retribution? Likewise for many other shows? Very unfair and should be looked into. This is the real Collusion!