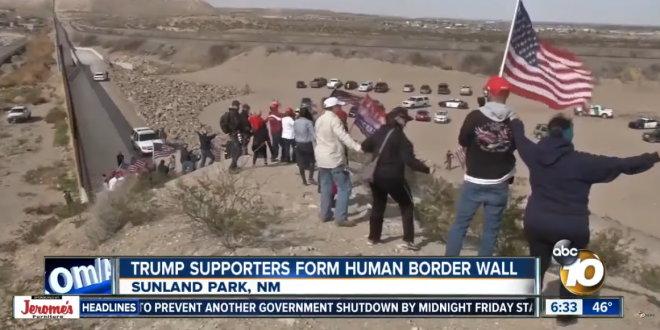 Just days after President Trump said his administration was prepared to “build a Human Wall if necessary” to protect the nation from illegal immigration, a group of his supporters in New Mexico joined hands along the U.S.-Mexico border in support of the construction of a border wall.

Men and women, waving American and Confederate flags, linked hands in support of the wall’s construction. Many wore signs around their necks bearing Trump rhetoric: “Stop the drugs that destroy our youth!” and “STOP CHILD TRAFFICKING.”

The protest comes ahead of Trump’s Monday visit to El Paso, which is located several miles from Sunland Park. The Trump administration said Sunday that the chances of another government shutdown had increased markedly over the weekend, as negotiations reached an impasse.

Tremendous numbers of people are coming up through Mexico in the hopes of flooding our Southern Border. We have sent additional military. We will build a Human Wall if necessary. If we had a real Wall, this would be a non-event!