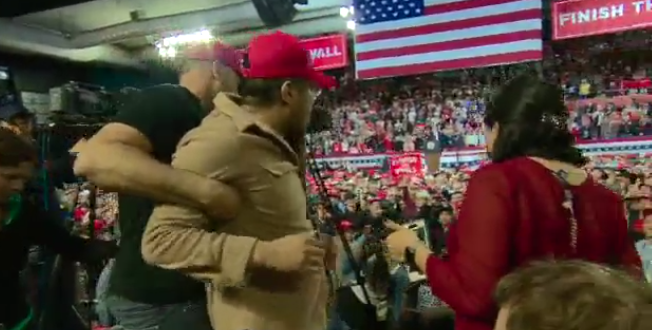 A supporter of US President Donald Trump has attacked a BBC cameraman at a campaign rally in El Paso, Texas. Sporting a Make America Great Again cap, the man shoved and swore at the BBC’s Ron Skeans and other news crews before being pulled away.

Mr Skeans said the “very hard shove” came from his blindside. “I didn’t know what was going on.” Mr Trump saw the attack and confirmed Mr Skeans was well with a thumbs up after it happened.

The president has had a fractious relationship with the media from the very start of his time in office. He has claimed journalists are “the enemy of the people” and slammed the “fake news” for reports he deems unfavourable.

This is the shameful moment when my cameraman Ron Skeans was attacked at an ⁦@realDonaldTrump⁩ rally in El Paso last night – warning this video contains strong language. Happily Ron is fine. #TrumpElPaso pic.twitter.com/Ay5DYT6gjP