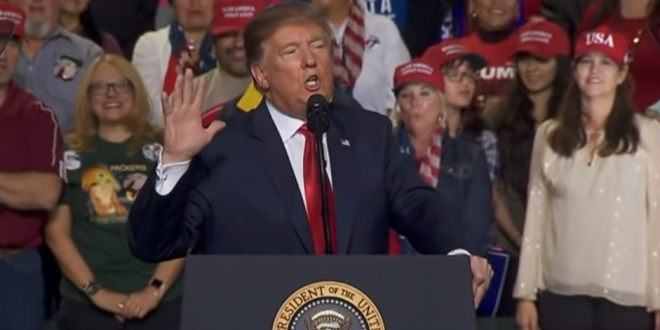 About 30 minutes into his rally, Trump said he had been challenged by “a young man who’s got very little going for himself except he’s got a great first name. So we have, let’s say, 35,000 people tonight, he has 200 people, 300 people — not too good,” Trump claimed. “That may be the end of his presidential bid.” He said later that 10,000 people were inside the stadium. Donald Trump Jr. also tried to mock Beto’s crowd size.

Trump’s audience inside the coliseum was 6,500, at capacity, El Paso Fire Department public information officer Enrique Aguilar told the El Paso Times. “It might be 10,000 with the people outside,” watching on monitors. The rally O’Rourke spoke at, following a mile-long march, drew at least 7,000 people, The Texas Tribune reports. Bloomberg’s Jennifer Epstein says that’s an undercount.

Donald Trump Jr. decides to mock @BetoORourke in his remarks, saying he drew a crowd of 50 tonight, then upped it to 200. Then said Beto should have his rally in Juarez.

Beto trying to counter-program @realdonaldtrump in his hometown and only drawing a few hundred people to Trump’s 35,000 is a really bad look.

Partial pic of the Trump overflow crowd below! #AnyQuestions pic.twitter.com/PKxkbcFNFO

But a reporter on the ground is citing law enforcement saying O’Rourke’s crowd is in the thousands. Watch live here, courtesy of @KTSMtv: https://t.co/kIgFHZzX1fhttps://t.co/AdiwedEPu7 pic.twitter.com/RjzK3YgGjg