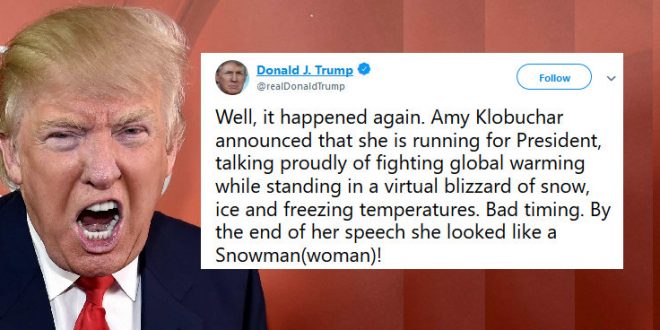 President Trump on Sunday mocked Sen. Amy Klobuchar (D-Minn.) for launching her presidential campaign in snowy conditions in Minnesota, tweeting that she “looked like a Snowman.” Klobuchar announced her candidacy on Sunday in Minneapolis. She laid out her vision for the country, and vowed to “put forth sweeping legislation to invest in green jobs and infrastructure” if elected president. She also declared that she would direct the U.S. to rejoin the Paris Climate Accord “on day one” of her administration.

Well, it happened again. Amy Klobuchar announced that she is running for President, talking proudly of fighting global warming while standing in a virtual blizzard of snow, ice and freezing temperatures. Bad timing. By the end of her speech she looked like a Snowman(woman)!