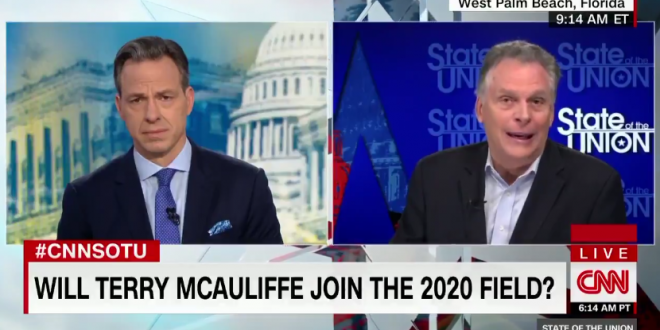 Former Virginia Gov. Terry McAuliffe (D) said Sunday he would “like” to run for president in 2020, but hasn’t decided yet. “I’ve said I’d make a decision by March 31. I’ve been talking to other candidates, I want to see what the positions are out there,” McAuliffe said on CNN’s “State of the Union,” adding he’s talked to “over 400 people” about it.

McAuliffe, a former Democratic National Committee chairman, earlier this month said there was a 50 percent chance he would run. CNN’s Jake Tapper pressed McAuliffe on whether the odds are still 50/50. “I’d like to do it. I think we had a great track record in Virginia,” he said.

Former Virginia Gov. @TerryMcAuliffe says he’d “like to do it” when asked whether he will run for president in 2020. #CNNSOTU pic.twitter.com/19S9JTXdGZ