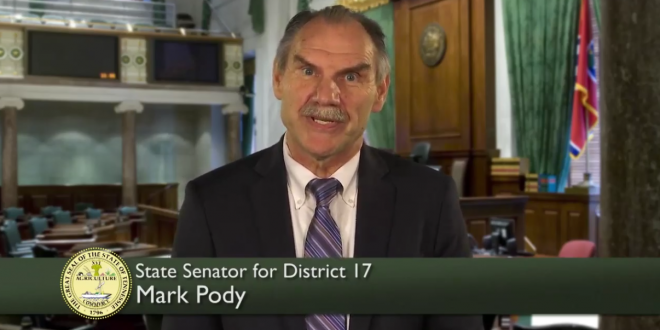 After failing to advance last session, Republicans have again filed legislation to keep Tennessee from permitting same-sex marriages, a bill officials previously estimated could cost the state more than $9 billion in federal funding.

Known as the “Tennessee Natural Marriage Defense Act,” the bill by Sen. Mark Pody, R-Lebanon, and Rep. Jerry Sexton, R-Bean Station, states that the U.S. Supreme Court’s 2015 decision to legalize same-sex marriage is void in Tennessee because the state has already passed its own law and constitutional amendment limiting marriage to one man and one woman.

The bill would prohibit government officials — presumably including clerks issuing marriage certificates — from giving recognizing any court ruling that affirms same-sex unions, and specifies they cannot be arrested for failing to comply with court orders that do so.

Mark Pody, you may recall, has appeared on JMG multiple times, first in late 2015 when he declared that God had personally told him to stop same-sex marriage. According to Pody, White Jesus has tasked him with being a “watchman” to warn the wicked that the wages of their same-sex sin will be death. In 2017, Pody was the lead sponsor of his state’s anti-transgender “bathroom bill” – which failed to pass out of its committee.