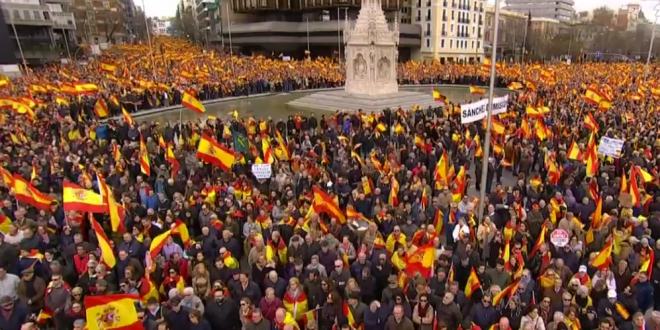 Thousands of Spaniards joined a right-wing rally in Madrid on Sunday to demand that Socialist Prime Minister Pedro Sanchez step down. Many in the crowd gathered in the capital’s Plaza de Colon, waving Spanish flags. They chanted slogans in favor of the nation’s security forces and for Sanchez to resign.

The conservative opposition Popular Party and the center-right Citizens party organized the rally, which was also backed by the upstart far-right Vox and other marginal far-right parties. They claim that Sanchez must resign for holding talks with separatists in the northeastern region of Catalonia.

The political tensions come as a highly sensitive trial at Spain’s Supreme Court starts Tuesday for 12 Catalan separatists who face charges, including rebellion, for their roles in a failed secession attempt in 2017. Sanchez inherited the Catalan crisis from former Prime Minister Mariano Rajoy, the then-leader of the Popular Party.

Sanchez came to power in June with the support of Catalan nationalist parties, which voted with him in a no confidence motion against former Prime Minister Mariano Rajoy, whose PP was embroiled in a corruption scandal.

Polls show that between them the PP, Ciudadanos and Vox would win a majority if a general election were held today, giving them the combined parliamentary clout to drive Sanchez from office.

They called the rally after Sanchez’s government last week accepted the presence — as asked by Catalan separatists — of an independent “rapporteur” in future talks between Catalan parties.