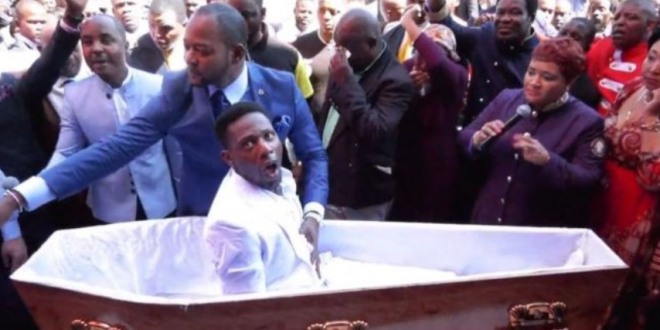 A group of funeral directors in South Africa say they will sue a self-styled prophet who claims to have resurrected a dead man. A viral video of Pastor Alph Lukau shows him shouting “rise up” to a man lying down in a coffin who then jerks upright to cheers from worshippers.

The funeral companies say they were manipulated into being involved. The spectacle, seen outside Pastor Lukau’s church near Johannesburg, has been ridiculed and condemned by many. “There are no such things as miracles,” the Commission for the Promotion and Protection of Cultural, Religious and Linguistic Communities said.

The BBC’s Milton Nkosi says the video has sparked a national debate on fake pastors and had been widely condemned by established religious groups. However some South Africans have taken to social media with the hashtag #ResurrectionChallenge to see the funny side.

While Pastor Alph Lukau is busy talking, I encourage to concentrate on the mouth of the guy in the coffin then you will decide if he was dead or not.

Maybe this guy can bring back the like of Nelson Mandela, Hector Peterson, Hugh Masekela, Steve Biko, OR Tambo and others. pic.twitter.com/lFoNsM0grO

Guys you must understand these kids don’t wanna be left behind…maybe along with their teacher 🙈 #resurrectionchallenge pic.twitter.com/nL9Ro2n6HV

#ResurrectionChallenge .After you spot your landlord after being ressurected when your rent is due pic.twitter.com/1HVIZoFFqd

Stlamatlama killing you? #Risefromthedead with our FLAMING SAUCE wings meal and win the #ResurrectionChallenge. You can share the meal with your #Pastor pic.twitter.com/1qZ4cu9Na7

Jus incase the pastor goes to my ex’s grave#ResurrectionChallenge pic.twitter.com/WawksON3eE