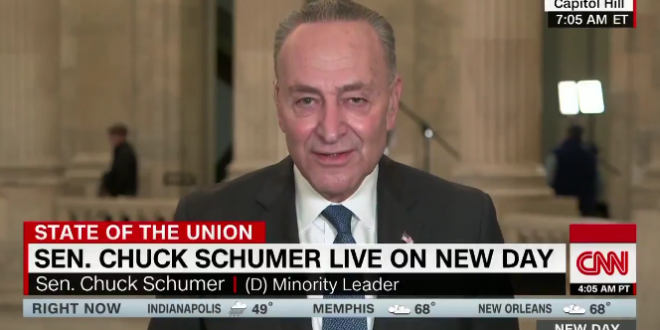 One of the most notable parts of last night’s state of the union address was when Trump said this: “An economic miracle is taking place in the United States and the only thing that can stop it are foolish wars, politics, or ridiculous partisan investigations. If there is going to be peace and legislation, there cannot be war and investigation. It just doesn’t work that way.”

That caught the ear of many, including Chuck Schumer:

The Senate Minority Leader took issue with Trump’s claim that the many investigations surrounding him hinder his progress as a leader, saying that was like “holding the American people hostage.”

“You know what I think it shows John? He’s scared. He’s got something to hide. Because if he had nothing to hide he would just shrug his shoulders and let these investigations go forward. He’s afraid of them,” Schumer added.

“The President was political, divisive, calculating and even nasty at times,” Senate Minority Leader Chuck Schumer says about Trump’s State of the Union speech.

“You can’t talk about about comity and working together and give a speech that is so divisive” https://t.co/jr4fnmKFgX pic.twitter.com/wlL2Bj4lzq

Previous Trump To Hold Second Summit With Kim Jong-Un
Next Santorum: That Was Trump’s “Worst-Delivered Speech”