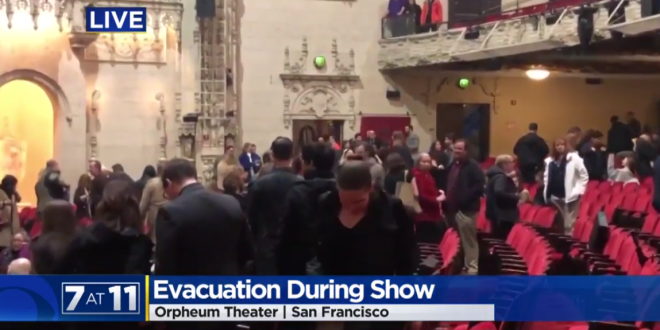 A medical emergency at the Orpheum Theater in San Francisco triggered an alarm about a potential active shooter during a performance of the hit musical “Hamilton,” leading the audience to evacuate.

There was no shooter, and the evacuation was set off by a woman’s unspecified medical emergency about 9:50 p.m. Friday, said Officer Joseph Tomlinson, a spokesman for the San Francisco Police Department.

“There was a woman that had a medical emergency, and while that was happening there was gunfire in the performance and the crowd, for whatever reason, connected the two, thought there was a shooter,” Tomlinson said.

Videos posted to social media show people frantically piling out of the Orpheum Theatre as armed officers responded to the scene. The “Hamilton” cast was also evacuated, prompting a round of applause once they were able to return to the theater. However, the show did not continue.

The San Francisco Fire Department said three people required hospitalization as a result of the panic – one with a broken leg and two with “moderate injuries.” The woman whose medical emergency triggered the confusion was also rushed to a hospital with “life-threatening injuries,” Tomlinson told USA TODAY.

I was in the balcony with my 6 and 9 year old. There was absolutely NO announcement. There was mass chaos and absolutely no support and direction from SHN staff. Extremely disappointed in how the event was handled.

@HamiltonMusical @Lin_Manuel I also agree that @shnsf‘s account is false. There was no announcement. There was chaos causing audience to respond as if there was a mass shooting. @SFPD @SFFDPIO responded as if there was such an attack not a medical emergency only.

“Hamilton” is excellent. Evacuating the theater due to immediate threat is not. So many scared faces surrounded us. pic.twitter.com/jkUxnGMvVM

Our #Hamilton show ended in a mass panic. Members of the audience started screaming and running, shouts of “gun” could be heard. The entire theater cleared out. Theater staff tells us it was actually one person who suffered a medical emergency. Someone misconstrued the situation pic.twitter.com/5RoeJhwdOm

Police respond to Orpheum in San Francisco after someone in audience had a seizure and someone started screaming. Led to panic and people running out of theater. Hamilton cast ran backstage. My daughter and I hid on ground behind seats til police cleared us. Scary moments. pic.twitter.com/ehWHtR03Xy