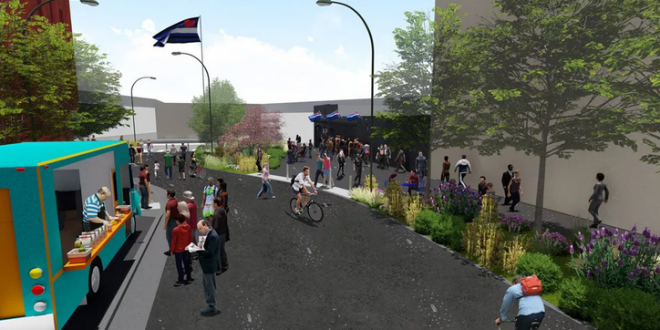 The designs for the 12,500-square-foot space include a prominent Leather Pride flag to acknowledge SoMa’s history with the LGBTQ and leather communities. The Eagle Plaza name derives from the nearby San Francisco Eagle gay bar.

Upon signing, Breed said in a public statement that Eagle Plaza “will be a place where we can recognize the Leather community and all LGBTQ people for their contributions to Western SOMA and our city, while also creating a much-needed new open space for all of our residents in the neighborhood.”

More from the Bay Area Reporter:

Local development firm Build Inc. will construct the plaza as part of a $1.5 million in-kind agreement with the city for approval of its mixed-use development across the street from the Eagle bar on what was a surface parking lot. Construction began last summer at 1532 Harrison Street on three seven-story buildings consisting of 136 rental homes.

Place Lab, started by Build and now part of the nonprofit San Francisco Parks Alliance, is overseeing the design of, and permits for, Eagle Plaza.

Rather than completely shut down the block of 12th Street between Harrison and Bernice streets to traffic, it will remain open to vehicles in both directions via a curving, 28-foot-wide two-lane roadway through the plaza. Bollards will be used to close off the street at both ends for special events.

The rendering above is by Build Inc. See more at the first link. And stand by for the usual wailing from Christianists.

Previous Payless To Shutter All 2100 Stores, End Online Sales
Next Dems Move To Force Trump To Reveal Talks With Putin