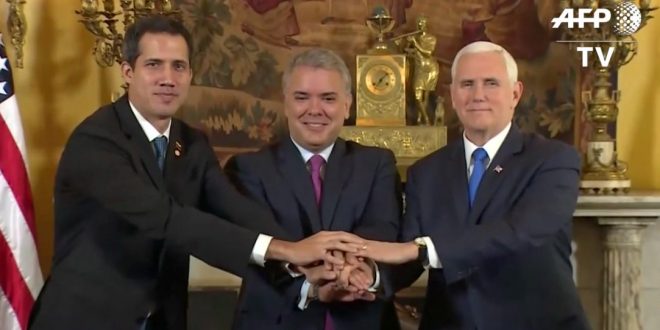 The Trump administration on Monday announced new sanctions on allies of Venezuela’s Nicolas Maduro and financial assistance to his opponent Juan Guaido as an effort to deliver humanitarian aid to the economically devastated nation faltered amid strong resistance from security forces who remain loyal to the socialist leader.

Vice President Mike Pence arrived in the Colombian capital for an emergency summit of regional leaders to discuss Venezuela’s crisis and immediately met with Guaido. In a speech to the group, Pence urged regional partners to freeze oil assets controlled by Maduro, transfer the proceeds to Guaido and restrict visas for Maduro’s inner circle.

He also repeated President Donald Trump’s threat that “all options are on the table” — fiery language that Guaido himself has adopted in what many see as a dangerous escalation of rhetoric hinting at the use of military force.