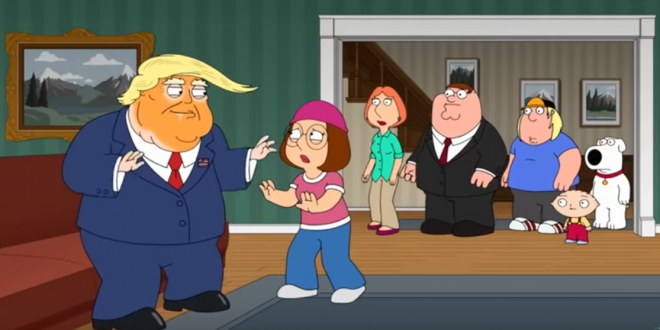 It has been several years since One Million Moms last addressed the content on “Family Guy.” A decade ago, 1MM contacted sponsors and even filed complaints with the FCC. Hoping it was in the past, we moved on to other worthy projects. Sadly, we were wrong. One of the latest episodes of Fox Broadcast Network’s “Family Guy” depicted the sexual assault of the animated character Meg Griffin, a high school teenager. To make matters worse, the character chosen to commit the crime was President Donald Trump while in the Oval Office.

The episode of concern aired on Sunday, January 13 at 9:00 p.m. Eastern/Pacific time, 8:00 p.m. Central/Mountain time. This vulgar program is far from family-friendly. However, Fox rated this episode TV-14 DLSV meaning that in the network’s opinion, this material is appropriate for 14-year-olds. This irresponsible and tasteless program is inappropriate for any age, but Fox believes this content is suitable for children who do not even have their driver’s license yet.

Fox’s “Family Guy” is encouraging violence, and almost every scene is filled with crude language, sexual innuendos, implications, or graphic encounters. It is almost impossible to describe the depth of depravity found in the Fox program “Family Guy.” No child should be subjected to this vulgar content in this outrageous show. Even though the program is animated, there are still victims. The victims of this outrageous show are any children who view the program and will likely be drawn to it since it is a cartoon.

Take Action: Add your voice today and hold Fox accountable! Please sign our petition calling out Fox for depicting sexual assault of a teen during a recent episode of “Family Guy.” Let Fox know you are also offended by the same January 13 episode that disrespected President Trump by portraying him as the one involved in this horrendous act.