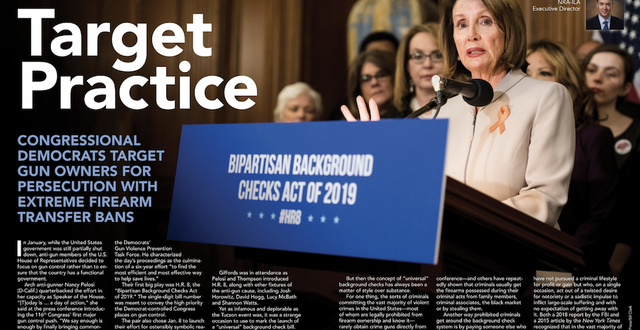 The National Rifle Association is facing scrutiny over publishing a magazine spread that depicts House Speaker Nancy Pelosi and former Rep. Gabby Giffords, a victim of gun violence, next to a large headline that reads “Target Practice.”

Lawmakers and advocates decried the American Rifleman layout as offensive on Saturday afternoon after Huffington Post reporter Jennifer Bendery shared pictures of the magazine on Twitter. From there, it went viral and was circulated to other lawmakers and Pelosi’s daughter.

Rep. Eric Swalwell of California also condemned the magazine spread and characterized it as a “call for violence.” He urged his followers to boycott the NRA, which publishes American Rifleman.

Magazine covers and titles are highly thought out. People get paid a lot of money on decisions like this. The decision in NRA magazine to have an article titled Target Practice next to photo of Pelosi and Giffords is intentional. This is incitement of violence and not OK! https://t.co/63mXCLn6UN

The Dems and Pelosi’s characterization of “gun violence” as a national emergency is incorrect. Since ’91, both the murder rate and the overall violent crime rate has fallen by an avg. of 47%. At the same time, Americans acquired a record number of firearms.https://t.co/WCRrFHUwum