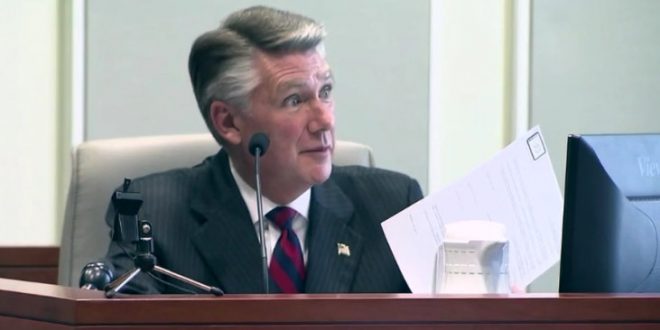 One of the biggest challenges facing Mark Harris Thursday as he took the stand in the North Carolina disputed election hearing was to discredit his son, whose testimony has been a body blow to the Republican candidate’s defense, while still coming across as sympathetic.

Mark Harris tried to achieve this effect by mixing subtle put-downs and fatherly pride. He said he was “very proud” of his son for testifying Wednesday, an appearance that reduced Mark Harris to tears in the courtroom.

Later in his testimony, Harris got more pointed about his son, calling him “a little judgmental with a taste of arrogance” and repeating that he had never met Dowless in person.

Harris said he didn’t believe his son’s warnings that a Bladen County political operative was likely committing felony absentee ballot collection before the 2018 election, and didn’t in fact see them as warnings. That left Board of Elections member Jeff Carmon, a Durham lawyer, incredulous.

“It was painfully clear to me that your son was saying dad don’t mess with this guy. It’s painfully clear,” Carmon said. “He said if this goes left instead of right, will you be able to handle what comes out in the media? That’s beyond a red flag.”

Harris entered politics upon the urging of Tony Perkins after leading campaigns against LGBT rights in North Carolina.

Previous Ann Coulter On Smollett: “All Hate Crimes Are Hoaxes”
Next Manafort’s Sentencing In Virginia Case Set for March 8