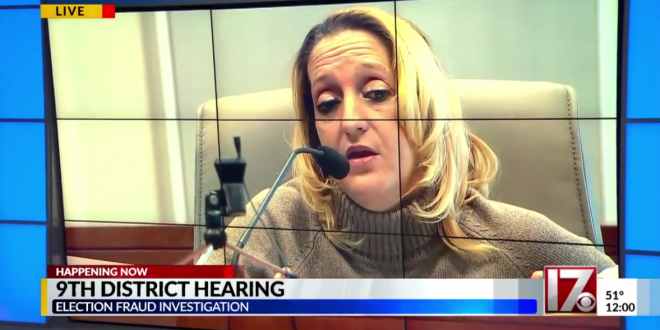 State election officials said Monday that a political operative for Republican Mark Harris orchestrated a complex scheme to illegally collect and falsify absentee ballots in the 9th Congressional District last year, hiding evidence of the scheme as it unfolded and obstructing the state’s investigation after the election.

Those explosive charges opened an evidentiary hearing in Raleigh Monday morning, where the North Carolina State Board of Elections began hearing witness testimony to decide whether enough ballots were tampered with to taint the outcome of the 9th District race.

The scheme involved a firm called Red Dome. That firm, which was hired by Mark Harris’ campaign, paid McCrae Dowless more than $200,000 between July 2018 and the November 2018 election.

🚨 Lisa Britt, one of Dowless’s ballot collectors, testifies that, if the ballot was unsealed and incomplete, they would fill in the blank offices. #NC09

This woman, Lisa Britt, is giving testimony right now about an explosive absentee ballot theft ring in North Carolina. She admitted taking absentee ballots for money and discarding them. She was urged to plead the 5th and not testify. This is madness— democracy is up for sale. pic.twitter.com/erK7wEQpQ1

This next witness, Kelly Hendricks, testifies that she received gas money and money for “other things” she needed in exchange for collecting absentee ballots and handing them over to McCrae Dowless.

This is the face of vote fraud in America today. #nc09 pic.twitter.com/pjMvJjmgPx