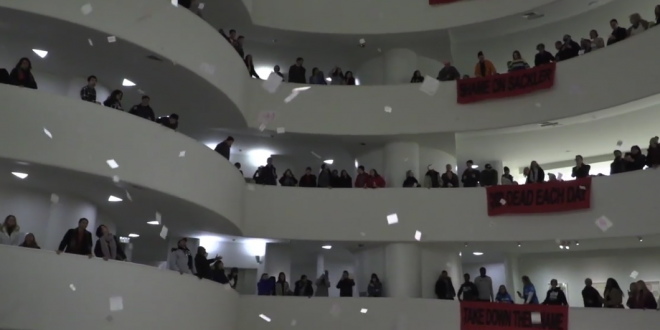 Art photographer and activist Nan Goldin brought the Guggenheim Museum in New York to a standstill on Saturday night as thousands of fake prescriptions were dropped into the atrium to protest against the institution’s acceptance of donations from the family who owns the maker of OxyContin – the prescription painkiller at the root of America’s opioids crisis.

Tourists and locals gawped in confusion as Goldin and fellow demonstrators began chanting criticism of the Sackler family, who owns Purdue Pharma. The activists handed out fake pill bottles as sheets of paper fluttered down inside the landmark building.

The protest then moved two blocks south on Fifth Avenue to the steps of the Metropolitan Museum and continued, as the police looked on. The Met has a wing named after the Sacklers and paid for by the family. The Guggenheim features the Sackler Center for Arts Education.

My first trip to the Guggenheim. Sackler family made Billions pushing Oxycotin and lying about the dangers. Fuck them and their money they shouldnt be honored in museums, they should be prosecuted! #SacklersLiePeopleDie pic.twitter.com/s0CwZ5YBYF

Video: Art photographer and activist Nan Goldin leads a protest at the Guggenheim Museum in New York against it and other cultural institutions taking donations from the Sackler family that owns the maker of OxyContin opioid painkillers. pic.twitter.com/l0EyyiGhcJ

Protestors tonight marched down Fifth Avenue in NYC from the Guggenheim Museum to the Met demanding the institutions remove the name of big donors—the Sackler family, owners of the company that products Oxycotin. Full report this week on Brian Ross Investigates @LawCrimeNetwork pic.twitter.com/7RHo67I3sI