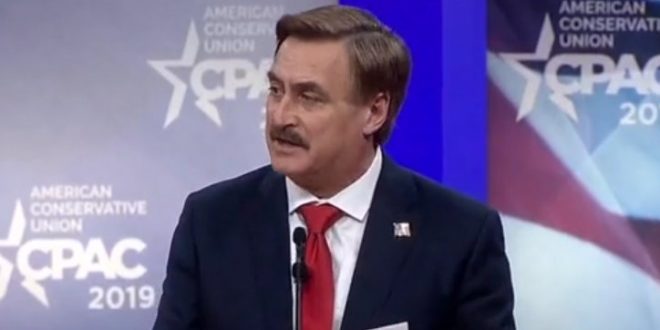 MyPillow Founder Mike Lindell: Trump Was “Chosen By God” And Is The Greatest President In History [VIDEO]

“God answered our millions of prayers and gave us grace and a miracle happened on November 8, 2016. We were given a second chance and time granted to get our country back on track with our conservative values and getting people saved in Jesus’ name. As I stand before you today, I see the greatest president in history. Of course he is, he was chosen by God.” – MyPillow founder Mike Lindell. speaking today at CPAC.

In November Lindell agreed to pay a penalty of $1 million after a group of California County Attorneys took legal action against the company, alleging deceptive advertising. A consumer watchdog organization said MyPillow’s website made unsubstantiated claims its products can cure snoring, migraines, fibromyalgia, and other health maladies.

Lindell agreed to the settlement, but insisted he made no medical claims whatsoever, saying MyPillow simply posted customer comments on the website. He told NBC News he is settling the charges simply because it makes financial sense, and is not an admission of guilt.

Previous Outrage After Trump Sides With Kim On Tortured American: He Says He Didn’t Know And I Believe Him
Next ISRAEL: Netanyahu To Be Indicted For Bribery, Fraud