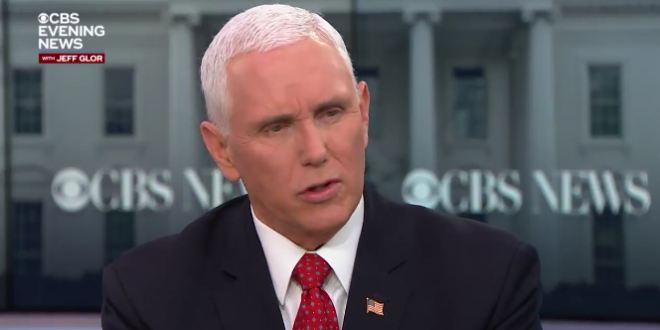 Vice President Mike Pence told CBS’s Jeff Glor on Wednesday morning he doesn’t believe the partial government shutdown was a mistake, saying Americans find it admirable that President Trump “says what he means and he means what he says.”

Despite having the longest government shutdown in history, President Trump didn’t mention any plan to help Congress secure a budget for 2019 in his entire 82-minute State of the Union address. Congress has until Feb. 15 to strike a deal with the White House or the government reverts back to a shutdown.

WATCH: Can you guarantee there won’t be another government shutdown?

“Well, I think our hope is that there’s not but I can’t make that guarantee, @JeffGlor. The simple truth is Congress needs to do their job.” — @VP Pence https://t.co/SwVoAcEVYV pic.twitter.com/ydPKN1vO8t

Previous Advance Seen In Work For Lab-Grown Human Kidneys
Next Former ICE Director: Last Night Proved That Trump Will Be Recognized As Among The Greatest Presidents Ever