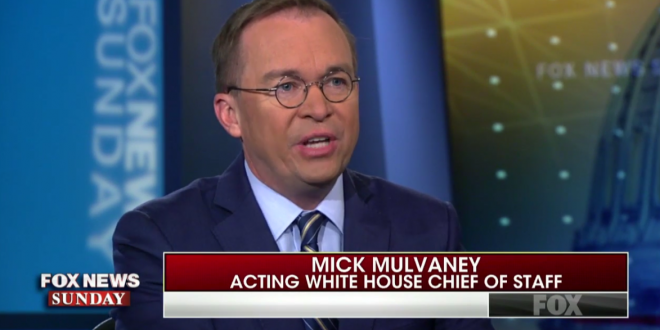 Mick Mulvaney: Another Shutdown Is Still On The Table

“The president has to sign a piece of legislation in order to keep the government open. He cannot sign everything they put in front of him. There will be some things that simply we couldn’t agree to,” Acting White House chief of staff Mick Mulvaney said during an interview on “Fox News Sunday.”

“So the government shutdown is technically still on the table. We do not want it to come to that, but that option is still open to the president and will remain so.”

House and Senate negotiators are working to reach a long-term spending deal after President Trump signed legislation last month ending the five-week partial government shutdown for three weeks. Funding is due to lapse again for a slew of federal agencies Friday if they are not successful.

Mulvaney blamed the uncertainty on congressional Democrats, arguing that the party appears torn between the “hardcore, left wing” that sees any funding for President Donald Trump’s signature border wall as a non-starter, and a more moderate faction that appears open to compromise.

“Let’s say the hardcore, left wing of the Democrat Party prevails in this negotiation and they put a bill on the president’s desk with, say, zero money for the wall, or $800 million, an absurdly low number. How does he sign that?” Mulvaney told “Meet the Press.”

Mulvaney asserted that a national emergency was “absolutely on the table” and said that a wall will be built, one way or another. “The president is going to build the wall,” Mulvaney said.

“You saw what the Vice President said there, and that’s our attitude at this point, is we will take as much money as you can give us and then we will go find money someplace else legally in order to secure that southern barrier. But this is going to get built with or without Congress.”

Mick Mulvaney says the government shutdown is still on the table #FNS pic.twitter.com/ZHKl9vmCEI

Mick Mulvaney on finding the person who leaked the Presidents Calendar #FNS pic.twitter.com/nWoevtM20n